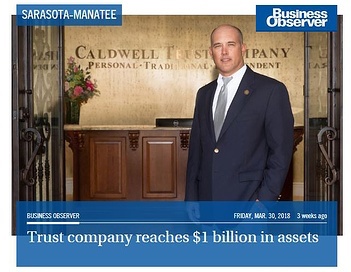 Caldwell Trust Company has reached the milestone of $1 billion in assets according to R. G. “Kelly” Jr., CEO/president. “We’re pleased to report that we’ve achieved this goal in the same year we’ll celebrate our 25th anniversary,” he said. “Our history has been one of steady, controlled growth since our founding in 1993.”

In the first ten years the company’s assets under care grew from 0 to $200 million. The number more than tripled over the next ten years, reaching almost $700 million by the 20th anniversary in 2013. The staff also increased, but not at the same pace, expanding from 5 at the beginning to the current level of 34.

Kelly Caldwell credits much of the company’s success to the philosophy espoused by his father, Roland G. Kelly, and the founding team. “They established our key principles, that the company would provide its services in a manner that would be personal, traditional, and independent. I’m proud to say we’ve never wavered from that commitment,” he said.

Another important factor has been proprietary software, created at the company’s inception and continually enhanced. It’s not by coincidence that many staffers are IT professionals.

Kelly also credits the company’s success to low turnover. “Dad always told me, ‘Turnover kills.’ He was absolutely right. In a business this personal, you can’t afford to lose people and their client relationships— and we don’t. It’s gratifying to know many of our first customers are still with us, along with their children and grandchildren,” he said.

“We have always treated our staff as well as our clients like family,” he said. As a result, some staffers have been with Caldwell Trust Company since the beginning and many have notched 15 or 20 years as employees. “Our clients know that they can depend on having a stable, ongoing relationship with their chosen trust officer now and into the future.”

The company’s employees are dedicated to the family-oriented culture and strong ethic of corporate citizenship. Caldwell Trust Company has donated over $1 million to local organizations and its employees also donate their time to serve on boards and committees of chosen area charities. This philosophy of has been recognized with a number of prestigious honors including “Large Business of the Year” (Venice Area Venice Chamber of Commerce, 2014) and “Frank G. Berlin Sr. Small Business of the Year” (Greater Sarasota Chamber of Commerce, 2016).

The success of Caldwell Trust Company has been visible even to passersby. The company began providing services in 1993, tucked away on the second floor of a bank building in Venice. In 2009 it added offices in an attractive street-front building at 1561 Main Street, Sarasota. As the need for more space became obvious, in 2013 Caldwell constructed a new, 11,500-square-foot headquarters facility--a signature building--at 1400 Center Road in Venice that is specially fitted out with vaults and redundant systems for data preservation, even in the event of category 5 hurricanes.

Caldwell Trust Company had its roots in the 1970s when Roland Caldwell formed Caldwell & Co., an advisory firm specializing in investment guidance for the trust industry. He watched with dismay as area banks and trust departments merged with other banks or moved away, usually causing upheavals for clients. He decided to form a new trust company that would remain independent—refusing even to sell products. Kelly, then a recent high honors engineering graduate of Georgia Institute of Technology, joined Roland. In late 1992 they assembled a small team of respected associates to prepare a charter application for Caldwell Trust Company. “We worked through most of 1993 to get our charter,” Kelly Caldwell said. “We received it on November 1, 1993 and had our first customer the next day. We were one of the few independent trust companies in the state. Twenty-five years later, we still are. And we intend to remain that way.”

What is 'Risk Tolerance' and How Does a Financial Advisor Use it When Investing? The Benefits of Having a 401k Plan for Your Business

5 Practices to Avoid in Order to Plan for Retirement